Brexit is a cancer, but Cummings, Gove, Johnson et al do not want that cancer to be treated.

Brexit is consuming the resources of the UK, with one sole aim, to kill the UK. Already £900 million has been consumed by Brexit. Resources that could have been spent on our schools, hospitals, infrastructure and other services.  https://www.instituteforgovernment.org.uk/summary-costing-brexit

One trillion of assets under management have either left the UK economy, or are set to leave the day that the UK exits from the EU. That represents around £15 billion in Govt tax revenue A YEAR from Financial Institutions. Gone. And it won’t be coming back. https://www.ft.com/content/016171be-4a74-11e9-8b7f-d49067e0f50d

400,000 jobs have been lost or will be lost due to Brexit. But those are just the reported jobs. The UK Economy is comprised of small businesses, which the Govt is supposed to champion. Brexit will kill off a huge chunk of these. How many? No one knows. No one has done the numbers.

UK assets. Our finest manufacturing and services companies will be broken up and sold to the highest bidder in the event of a No Deal Brexit. Many companies have already left. Set up shop on the continent or Ireland. Those jobs will not be coming back.

But Brexit is not the only cancer. The Conservative party has a cancer. It is the ERG. And the party is close to death because of it. The ERG is a brain cancer. A cancer that is caused by the belief in lies.

Members of the ERG say believe in Brexit, in the same way that people say believe that you will get better, if you have cancer but withhold treatment.

Cummings, Johnson, Gove et al want to prevent the treatment of Brexit which is the extension of Article 50.

An Extension of Art 50 will allow either a withdrawal agreement, which will be living with cancer, but just under a huge amount of pain, as the current Brexit negotiations, on top negotiations with the rest of the world, and both will continue for YEARS.

We are here at a critical stage. And there is a further cancer. The cancer of international corruption. The corruption that allowed £8m to be paid from an IoM account owned by Arron Banks, to finance the swinging of the EU referendum result.

The corruption that allowed an advisory referendum, nothing more than an opinion poll, to be treated as if it was binding, but that resulted in the National Crime Agency not being able to prosecute Arron Banks, because he only financed a poll. Had it been a legally binding referendum, BANKS WOULD BE IN JAIL.

And Arron Banks is at the core of the cancer of corruption. That £8 million, that is alleged to have come a BVI Account, Sandalwood, owned by Putin.   Banks’s companies were making no where near enough money to magic up £8m.

That corruption which is still continuing, with Johnson and Cummings now likely bribing Orbán and Hungary. And Orbán likely being bribed by Putin from the other side, to veto the Article 50 extension.

People say that Hungary (and or Poland) would not veto the extension; after all they both receive a huge net payment from the EU, and many of their citizens resident in the UK would and indeed are suffering because of Brexit.

But with the cancer that is corruption, all bets are off.

It might go well and Boris Johnson requests the extension as he is legally obliged to do, the EU then grants the extension, and we can then treat our Brexit cancer…

….a Withdrawal Agreement with the sketchiest base of a trade deal (years of painful negotiations with the EU and ALSO the WTO = a slow death), a #PeoplesVote (the cancer is cut out, and the UK is onto the path to recovery) or a General Election, where we can choose to vote Lib Dem and get Brexit revoked.

If the Art 50 extension is vetoed, the UK has one option, which is to Revoke Art 50, before we crash out without a deal. But will MPs act in the best interests of their constituents and country and do so? Extraordinarily, this is not a forgone conclusion.

@peterjukes: @supertanskiii I guess most people have had an inappropriate snog or a clinch they wouldn’t want caught on camera. On the other hand - using the Matt Hancock principle - most people can’t hand out Government jobs, run a bad Covid response or bung billion pound contracts to their mates.
h J R
@Big_Headers

@AdamBienkov: We already know Boris Johnson condones Chris Pincher’s behavour. He made him Deputy Chief Whip, despite him previously resigning over similar actions and despite more such allegations being made immediately before Johnson re-appointed him. https://t.co/BsYvB0r1iO 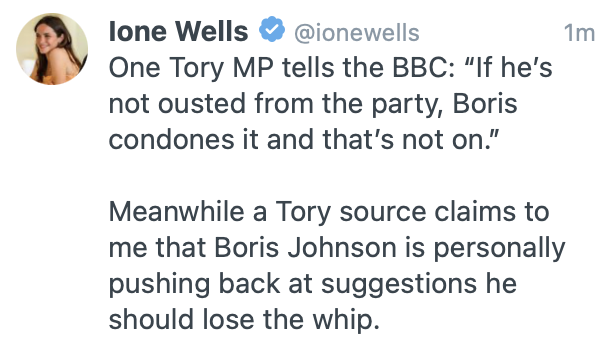 @TopNewsWorks: The more times you are infected with COVID the LESS resilient you become, and the MORE your autoimmune system will be damaged. The stupidity of saying that catching COVID will reduce the chances of your catching COVID again needs to be emphasised. It's the opposite... https://t.co/0BbtwCAZKu
h J R
@Big_Headers

@TopNewsWorks: And so Johnson’s attempt to get Carrie a job got canned. And Williamson walked around with a smug grin carrying his whips black book. He didn’t let the secret out. And has now, in return for the favour, been knighted! 2/2 👆won’t be in the news. But is on Top News!
h J R
@Big_Headers

@TopNewsWorks: When Johnson was Foreign Secretary, Gavin Williamson MP walked into his parliamentary office, to find Carrie Symmonds giving him a blow job on the sofa. At the time Johnson was also trying to get Symmonds a 100k Govt job Until that moment, no one knew she was his mistress. 1/2
h J R
@Big_Headers

@TopNewsWorks: Russia invaded Ukraine. Ukraine is now joining the EU. Russia corrupted the UK at the highest levels, and that followed through with Johnson supporting Leave. When will the UK be bringing the EU flag back home? https://t.co/Jpg0cXWHDU
h J R
Follow @Big_Headers
Top